skip to main | skip to sidebar

finally its up and running!! a few of the links aren't connected cause i'm still working on those pages but most of it is good to go although there will be more to come!! keep checkin back!!
www.thefbombers.com
-kim
Posted by The F Bombers at 3:53 PM No comments: 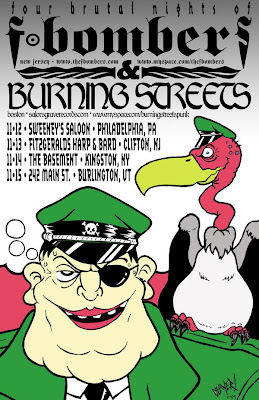 well 09' may be coming to a close but we are far from finished. i wanna thank everyone who came out to the party in clifton at the harp!! i love that bar so much, it was a joint birthday party for the f bombers turning 2 and our crazy buddy rich. it was such a sick night, with a pinata and party hats a giant 5 layer cake that looked like a foamy mug of beer!! oh and alcohol LOTS of alcohol. crave case and the most beautiful losers came out from ohio to play. halfway into our set the pa went out but we just busted out some fugazi "sittin in the waiting room" till it got fixed. it was sick. good times, defiantly going to be an annual party. already getting ideas for next year.
check out the new video on youtube for our song "sick of it all" it features footage from our cd release show at the court tavern in new brunswick nj. i kinda got the hang of using the editing software so there will defiantly be more to follow!!!
next week we are getting in the bus for 4 tour dates with boston's burning streets. heading to philadelphia pa, clifton nj, kingston ny, then finishing it up in burlington vt. hopefully we wont be freezing our asses off! very excited to bring our new mascot camo along for the trip! camo is kevins dog we got in ohio on our last tour. he rules!!
during those dates we are going to start introducing some of the new songs we been working on.
im gonna try to film the whole week so i can edit a short film together. haaha im into this whole editing thing!!!
well that's it for now, defiantly check out those bands!!
see ya out there
-kim
Posted by The F Bombers at 12:31 AM No comments: